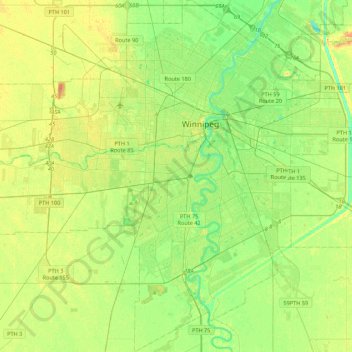 Winnipeg lies at the bottom of the Red River Valley, a flood plain with an extremely flat topography. It is on the eastern edge of the Canadian Prairies in Western Canada and is known as the "Gateway to the West". Winnipeg is bordered by tallgrass prairie to the west and south and the aspen parkland to the northeast, although most of the native prairie grasses have been removed for agriculture and urbanization. It is relatively close to many large Canadian Shield lakes and parks, as well as Lake Winnipeg (the Earth's 11th largest freshwater lake). Winnipeg has North America's largest extant mature urban elm forest. The city has an area of 464.08 km2 (179.18 sq mi).