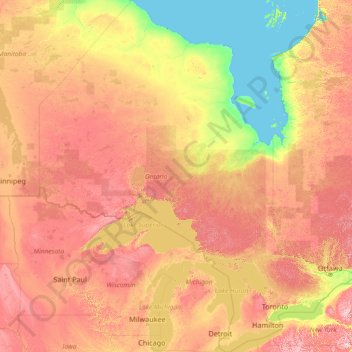 Despite the absence of any mountainous terrain in the province, there are large areas of uplands, particularly within the Canadian Shield which traverses the province from northwest to southeast and also above the Niagara Escarpment which crosses the south. The highest point is Ishpatina Ridge at 693 metres (2,274 ft) above sea level in Temagami, Northeastern Ontario. In the south, elevations of over 500 m (1,640 ft) are surpassed near Collingwood, above the Blue Mountains in the Dundalk Highlands and in hilltops near the Madawaska River in Renfrew County.