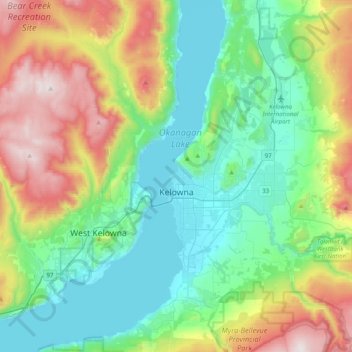 Kelowna is classified as a humid continental climate or an inland oceanic climate per the Köppen climate classification system due to its coldest month having an average temperature slightly above −3.0 °C (26.6 °F) and below 0 °C (32 °F), with dry, hot, sunny summers and cool, cloudy winters, and four seasons. The official climate station for Kelowna is at the Kelowna International Airport, which is at a higher elevation than the city core, with slightly higher precipitation and cooler nighttime temperatures. Kelowna has the second mildest winter of any non-coastal city in Canada, after neighbouring Penticton. This is caused by the moderating effects of Okanagan Lake combined with mountains separating most of BC from the prairies; however Arctic air masses do occasionally penetrate the valley during winter, usually for very short periods. The coldest recorded temperature in the city was −36.1 °C (−33.0 °F) recorded on 30 December 1968.