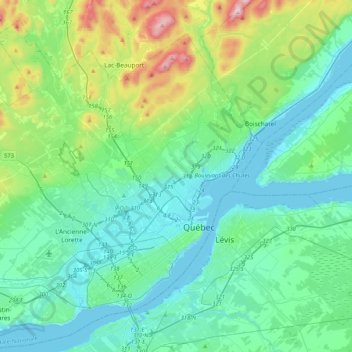 Quebec City was built on the north bank of the Saint Lawrence River, where it narrows and meets the mouth of the Saint-Charles River. Old Quebec is located on top and at the foot of Cap-Diamant, which is on the eastern edge of a plateau called the promontory of Quebec (Quebec hill). Because of this topographic feature, the oldest and most urbanized borough of La Cité-Limoilou can be divided into upper and lower town.[36] North of the hill, the Saint Lawrence Lowlands is flat and has rich, arable soil. Past this valley, the Laurentian Mountains lie to the north of the city but its foothills are within the municipal limits.