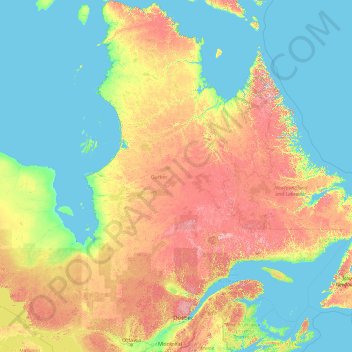 Quebec's topography is very different from one region to another due to the varying composition of the ground, the climate, and the proximity to water. More than 95% of Quebec's territory, including the Labrador Peninsula, lies within the Canadian Shield. It is generally a quite flat and exposed mountainous terrain interspersed with higher points such as the Laurentian Mountains in southern Quebec, the Otish Mountains in central Quebec and the Torngat Mountains near Ungava Bay. While low and medium altitude peaks extend from western Quebec to the far north, high altitudes mountains emerge in the Capitale-Nationale region to the extreme east. Quebec's highest point at 1,652 metres (5,420 ft) is Mont d'Iberville, known in English as Mount Caubvick. In the Labrador Peninsula portion of the Shield, the far northern region of Nunavik includes the Ungava Peninsula and consists of flat Arctic tundra inhabited mostly by the Inuit. Further south is the Eastern Canadian Shield taiga ecoregion and the Central Canadian Shield forests. The Appalachian region has a narrow strip of ancient mountains along the southeastern border of Quebec.