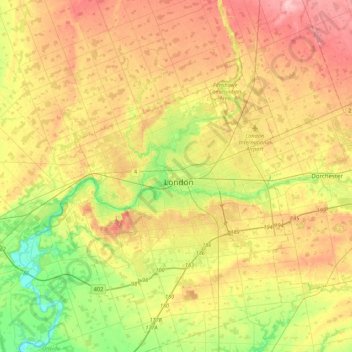 London has a humid continental climate (Köppen Dfb), though due to its downwind location relative to Lake Huron and elevation changes across the city, it is virtually on the Dfa/Dfb (hot summer) boundary favouring the former climate zone to the southwest of the confluence of the South and North Thames Rivers, and the latter zone to the northeast (including the airport). Because of its location in the continent, London experiences large seasonal contrast, tempered to a point by the surrounding Great Lakes. The summers are usually warm to hot and humid, with a July average of 20.8 °C (69.4 °F), and temperatures above 30 °C (86 °F) occur on average 10 days per year. In 2016, however, temperatures at or above 30 °C (86 °F) occurred more than 35 times, and in 2018, four heatwave incidents led to humidex temperatures topping out at 46 °C (115 °F) . The city is affected by frequent thunderstorms due to hot, humid summer weather, as well as the convergence of breezes originating from Lake Huron and Lake Erie. The same convergence zone is responsible for spawning funnel clouds and the occasional tornado. Spring and autumn in between are not long, and winters are cold but witness frequent thaws. Annual precipitation averages 1,011.5 mm (39.82 in). Its winter snowfall totals are heavy, averaging about 194 cm (76 in) per year, although the localized nature of snow squalls means the total can vary widely from year to year. The majority of snow accumulation comes from lake effect snow and snow squalls originating from Lake Huron, some 60 km (37 mi) to the northwest, which occurs when strong, cold winds blow from that direction. From 5 December 2010, to 9 December 2010, London experienced record snowfall when up to 2 m (79 in) of snow fell in parts of the city. Schools and businesses were closed for three days and bus service was cancelled after the second day of snow.