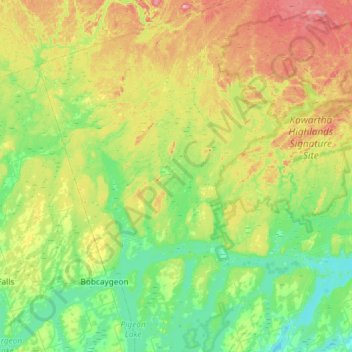 The lumber and agricultural industries are significant to the history of the township. Due to the topography of the region, agricultural production was limited to only certain areas where soil conditions were adequate and cattle and mixed farming (orchards, cattle, horses, sheep, grains, vegetables, chickens and turkeys) were the predominant formats. Lumber production in the area led to the construction of standing timber lumber camps, with the numerous waterways allowing the transport of that lumber to production and processing mills in the area. This led to the development of settlements of forestry workers, but non-resident lumber barons took most of the gains from the industry. With the decline of the lumber industry, the settlements in the region also grew less populous. The French Canadians, Irish immigrants and other lumber labourers moved to other thriving locations, leaving smaller groups in the region. Galway, Cavendish and Harvey wards all have ghost settlements and nearly-forgotten communities including Silver Lake, Rockcroft, Scotts Mills, Fortesque. Following World War II, the area became popular as a camping and cottaging area.