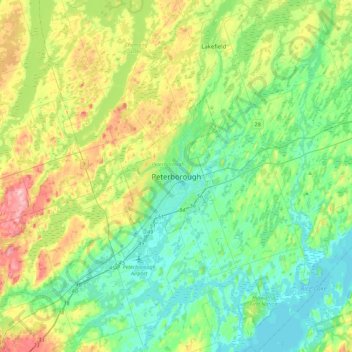 Peterborough's topography is largely defined by land formations created by the receding Wisconsian glaciers 10,000–15,000 years ago. The South End and Downtown portions of the City sit on what was the bottom of the glacial Lake Peterborough—part of a glacial spillway created when glacial meltwaters from ancient Lake Algonquin (now Lake Huron) travelled south to ancient Lake Iroquois (now Lake Ontario). This area of relatively low and flat relief (approximately 191–200 m (627–656 ft) above sea level) is prone to flooding, exemplified in the major flood that occurred on July 15, 2004. The ground elevation rises to the west, north, and east where a large upland area (the Peterborough Drumlin field) defines the landscape. Much of the land in the North and West Ends of the City rises to 230–274 metres (755–899 ft) above sea level, with Tower Hill, at 286 m (938 ft) above sea level, being the highest point in the City. Armour Hill, another prominent drumlin located in East City, forms the physical obstacle that the Trent-Severn Waterway ascends by way of the Peterborough Lift Lock. The Oak Ridges Moraine is located approximately 15 kilometres south of the city.